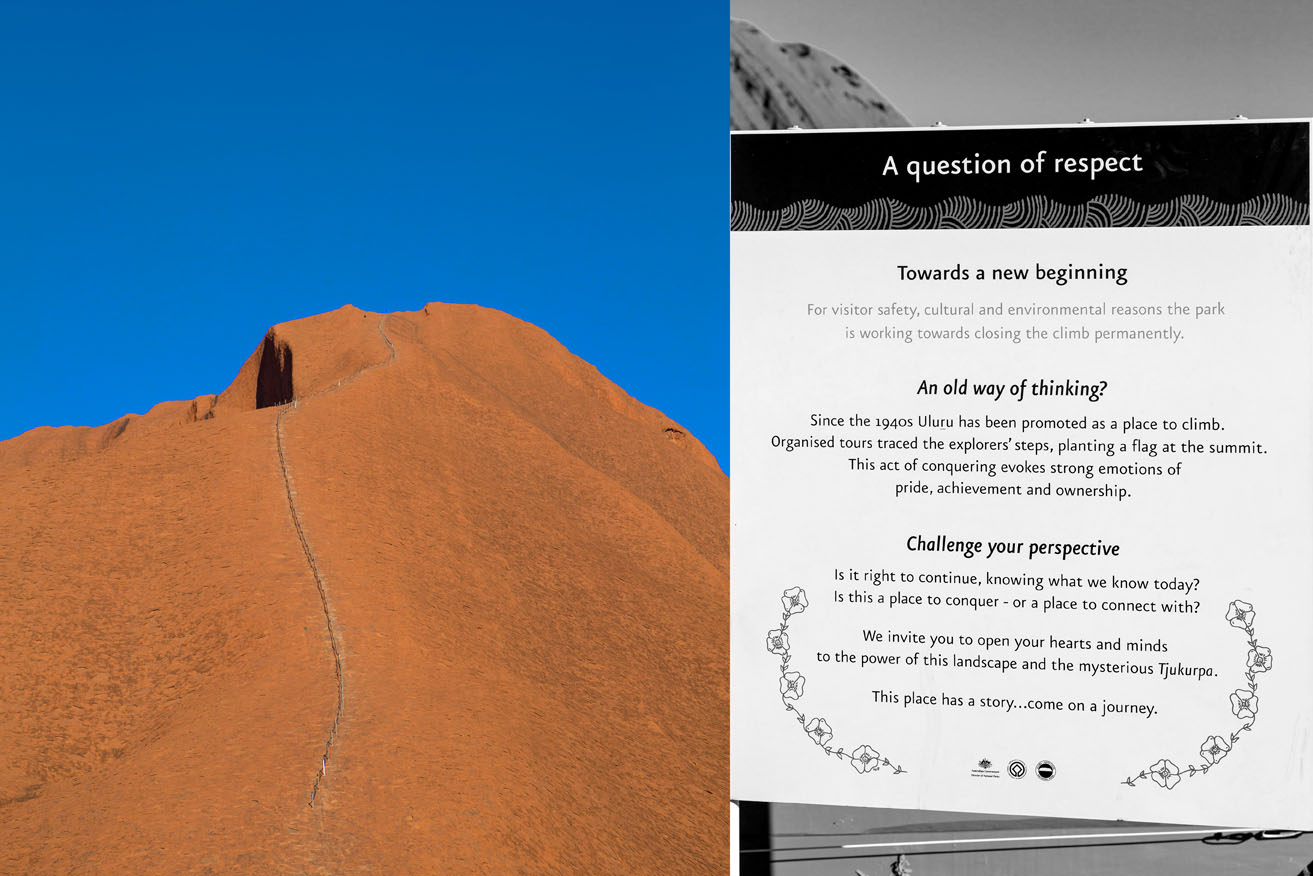 My visit to Uluru (Ayers Rock) is having an ongoing impact on me. My younger sister and I made it there on a round trip through Australia in April 2015. On our way we’ve already read about its sacred significance to Aboriginal people and that they don’t like to see people climbing it. We were a bit concerned about ascending it ourselves, because we didn’t want to be disrespectful as we were guests. But honestly we were still thinking: ‘We came all the way, we will be here probably only once in our lives, so many people have done it before, two more won’t make a difference…’ We were determined: of course we were going to climb it!

But we didn’t skip the visitor’s centre and were educated about the touristic history of this sacred place and the impact it had on its native inhabitants. I couldn’t articulate it back then, but when I stepped out of the centre, I personally felt that if I would climb Uluru I would become even more alien to this place and that I would actually miss out of something or get it wrong. I looked at my sister. She must have caught a similar feeling because we almost simultaneous said to each other that we were not going to climb it.

As we approached this significant landmark, we came across a sign that articulated my feeling:

“Since the 1940s Uluru has been promoted as a place to climb. (…) This act of conquering evokes strong emotions of pride, achievement and ownership. (…) Is this a place to conquer – or a place to connect with?”

These words have really hit me back then. It felt as if every fibre in my body responded with a warm and strong ‘Exactly!’, not only referring to this visit to Uluru but to my life as well. I finally understood something: Connecting is not possible if I’m approaching with a mind to conquer. The idea of conquering comes with an intention to create a sort of hierarchy towards things, places and people. This will not allow you to connect with anything or anyone. I thought: If the famous intention of ‘conquering the world’ would have been ‘connecting the world’ instead, we would be in a whole different space now- not only referring to territories or different cultures, but treatment of fellow human beings and animals.

It became clear to me that my brain was filled with thinking habits that would make me check on intentions, who I was compared to another person, being judgemental, trying to be individual, being in charge and so on. Bottom line: I was constantly busy putting myself in a relation to whom or whatever I was approaching. Not only were these ongoing patterns attached to the type of emotions mentioned on that sign at Uluru, like pride. I could also find thoughts about advantage, (self-) righteousness, being a winner or a loser. As a result I was unconsciously creating actions that would not speak of being connected to anything at all, either to myself or what was in front of me. I realised that in order to feel the need of taking action to build a relation(-ship), you have to come from a space of not feeling connected in the first place.

When I started to recognize this, my state of being connected has increased. I began to rest in me more, became more trusting, peaceful, affectionate to people and situations, because I don’t need to do anything. I’m enough. The people I meet don’t need to do anything and they are enough, too. We share an existence on this planet and everything is part of how the universe expresses itself and part of the miracle. Just like me and like everyone and everything. I’m actually feeling that I’m less dealing with myself when I meet people, but am more open to actually deal with them and with the situation in the moment. This makes encounters even more authentic, because they’re beginning within the state of connection, starting with the connection with myself. All over a sudden, there is a beautiful space for each other and for what wants to come through.

Further I was thinking about all the love relationships I’ve had, all the role-play and expectations. It became clear to me what has often been so very unsatisfying when I have been with a male. The world around me has seemed to accept an average idea about what is masculine and what is feminine. I have tried to find myself within, but never truly became familiar with it. I know there is diversity and expectations in everything, but the most common idea of the masculine is the idea of the male as being the hunter, the conqueror. I have met and been with men who believed in it. I have tried to make myself believe in it too. I’m still failing at it. When I would simply do what I felt natural about, and would not serve role games the male lost interest pretty much instantly. When I played along and let them ‘hunt’ me I found them almost just as instantly retire from their status within a relationship. No more hunting, no more effort. I thought: “Do I look hunted to you?” Thing is, it just doesn’t work with any person. You can’t ever have a person. And when would be the point were the hunt is over? We’re all free and equal to each other and get into a relationship by free choice. And that has always been the real beauty about it for me. I’ve always looked at a relationship with a maze and felt humbled and happy about another person, sharing their lifetime with me. It’s the most precious thing we’ve got and out of all of the people and opportunities, a person I care about, would choose me back. To me it’s most beautiful and a true gift and I’ve never been able to take it for granted.

I’m going down that way because approaching within roles didn’t allow me to live a real relationship. I always started from a connection I was feeling to somebody. For me connection is the absolut turn on. From there I was curious and open and simply tried to nurture, explore, share and deepen this connection. And what I’ve found to realise that day at Uluru about nature, made me realize even further, that the relationships were never fulfilling because it’s impossible to connect with someone who’s trying to conquer instead. Really- It’s either or!

I truly believe that if you have a connection with someone, it is unnecessary to take the detour through anything that isn’t truly your nature. No need to get caught up in foreign ideas. What’s there is real and wants to be appreciated and explored. There is nothing that needs to be done. Let go, be lived, be amazed, be grateful and immerse fully or else you’ll miss the whole thing. “Is this a place to conquer something – or a place to connect with everything?”